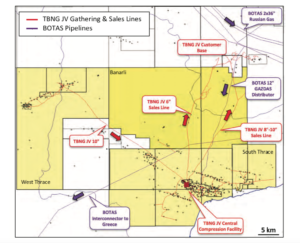 The Company produces a small amount of oil and condensate. These liquids are trucked directly from the individual well sites to the Ophet storage facilities before being barged to the Tupras refinery east of Istanbul. Recently the Company has been realising a sales price similar to Brent Oil pricing.

The Company’s natural gas infrastructure is currently underutilised and has the capacity to handle approximately 50 MMcf/d. This is sufficient capacity to allow for growth in the Company’s conventional production and for the appraisal of the BCGA play and any potential early development project. If the BCGA project is successful then the Company will require access to infrastructure beyond the capacity of its existing grid. There are multiple options for increased capacity with proximal pipeline infrastructure capable of several Bcf/day. These include tie-in to the regional gas distributor GAZDAZ, an existing export line to Greece, the major line from Russia to Istanbul, and the TANAP line which is currently complete to the Greek border and is expected to connect to Italy via the Trans-Adriatic Pipeline (TAP) in 2020.