All of Valeura’s land assets are in the Thrace Basin of Turkey.

In Turkey, Exploration Licences are held for an initial period of 5 years. There is a work programme obligation (drilling seismic, and/or studies) associated with each year and the annual programme must be complete prior to the end of that year. The holder may request two, 2-year extensions subject to agreeing a work programme obligation with the government for each of the years in the extension. Additionally, if there has been a discovery, then the holder can request a third, 2-year extension period. Petroleum can be produced during the exploration phase to the benefit of the holder.

Production Leases can be for an initial term of a maximum of 20 years. The initially granted term may be shorter than the maximum, if the expected production life of the discovered fields is less than 20 years. However, if less than the full 20-year term is awarded, this can be increased during the life of the production lease if production life is increased. If there are still reserves and production on the lease after the initial 20 year term then the holder can request two 10 year extensions. There is no work programme obligation during a production lease, but the holder is expected to take measures to maintain optimal production from the lease. 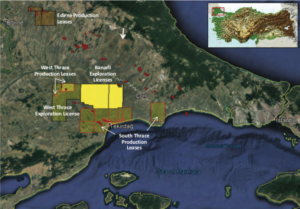 Prior to agreeing to monetise its conventional gas production business, Valeura had gas production from the South Thrace and West Thrace Production Leases, where natural gas is produced from relatively shallow reservoirs down to a depth of approximately 2,800 metres.  Valeura will remain the operator for the Production Leases associated with this production, but following completion of its sale transaction, effective July 1, 2020, no longer has a contractual interest the gas production.

The Company continues to hold both a legal and contractual interest in deeper rights, associated with its deep tight gas play, including the South Thrace and West Thrace Production Leases, as well as a West Thrace Exploration Licence and two Banarli Exploration Licences.  This includes a total of 0.407 million gross acres (0.337 million net acres).

There is one commitment well required in each of the three exploration licences prior to their expiry on June 27, 2022. Further extensions are possible thereafter.