Turkey’s location at the crossroads of Europe and Asia has shaped its history and people and made it a country of significant geostrategic importance. In more recent times, the strong growth of Turkey’s economy and its role as a key energy transit hub have seen it recognised as regional power.

Following the adoption of financial and fiscal reforms as part of an IMF programme early in the prior decade, Turkey’s economy grew strongly from 2001-2008, averaging more than 6% annually. In 2010 and 2011, Turkey’s economy was one of the fastest growing in the world with annual GDP growth rates of 9.2% and 8.8%, respectively. During this same period, Turkey had seen the fastest growth in energy demand in the OECD driven by this economic growth as well as the urbanisation of the population. According to the International Energy Agency, this is set to continue with energy demand expected to double over the next decade. The GDP growth rate has since moderated to between 2% and 6% per annum.

As well as being a major energy importer, Turkey is a key energy transit hub between the demand centres of Europe and the major producing regions in Russia, the Caspian region and the Middle East.

The Republic of Turkey is located in southeastern Europe and southwestern Asia (that portion of Turkey west of the Bosporus is geographically part of Europe), bordering the Black Sea to the north, between Bulgaria and Georgia, and bordering the Aegean Sea and the Mediterranean Sea to the south, between Greece and Syria. 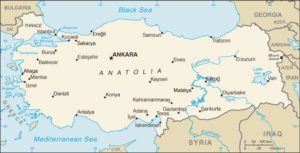 Outlined below are some of the key entities involved in Turkey’s energy and upstream oil and gas sector:

Ministry of Energy and Natural Resources (MENR)
Responsible for the preparation and implementation of energy policies, plans and programmes in co-ordination with its affiliated institutions and other public and private entities

General Directorate of Energy Affairs (EIGM)
The main policy-making body within MENR. It is tasked with executing national energy policy and it also conducts studies on energy policy, energy markets, efficiency, and environment

Turkish Petroleum Corporation (TPAO)
The national oil company and the main exploration and production entity in Turkey, including a large presence in the Thrace Basin

Petroleum Pipeline Corporation (BOTAS)
The state-owned vertically integrated gas utility, involved in the construction and operation of oil and gas pipelines, as well as holding a dominant position in the purchase of imported gas and resale to the wholesale market in Turkey

Fiscal Regime
Turkey’s fiscal regime for oil and gas licences is presently comprised of royalties and income tax. The government royalty rate is 12.5% and the corporate income tax rate is 22%. Additionally, a 15% withholding tax is applied on any dividends distributed to foreign entities. However, the withholding tax may be reduced to 10% depending on the bilateral treaties signed between Turkey and the home country of the petroleum rights holder in Turkey.

Licensing
The licencing process in Turkey for oil and gas concessions occurs in three stages: permit, licence and lease. The New Petroleum Law (Petroleum Law No. 6491) dated June 30, 2013 was adopted by the Turkish Government replacing the longstanding predecessor Petroleum Law No. 6326 adopted in 1954. For a detailed discussion of the licensing regime under the New Petroleum Law, see Valeura’s 2016 Annual Information Form (“2016 AIF”) filed on SEDAR (www.sedar.com).

With regard to major natural gas pipelines, BOTAS owns and operates the national gas grid which connects essentially all the major population centres and is within easy access to the Company’s existing and planned operations in the Thrace Basin of north-western Turkey. 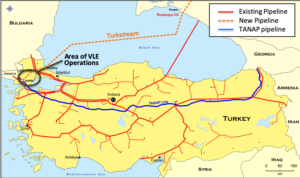 Pricing
Turkey imports more than 98% of its natural gas and 92% of its crude oil energy needs and as such any new production has a ready market. Consequently, the Company does not foresee any major concern with the marketing of crude oil or natural gas from its operations.

Crude oil pricing in Turkey is determined under the Petroleum Market Law No. 5015 (Gazetted on December 12, 2003). The pricing for the sales of crude oil is established according to the nearest accessible global free market condition. The domestic crude oil price is linked to world market factors with the base market price being the price at the nearest delivery port. Customary transportation and crude oil quality premiums or deductions, as the case may be, are applied to determine the crude oil price at the custody transfer point. Domestic purchasers and refiners are to give priority to domestic crude oil under the above pricing process.

Total natural gas demand in Turkey in 2018 was approximately 4.8 Bcf/d. BOTAS is the major importer and distributor of natural gas in Turkey. Although some import contracts have been released to private operators, BOTAS currently controls approximately 80% of Turkey’s natural gas imports. Given the very small domestic production of approximately 0.07 Bcf/d, there is a robust market for additional domestic natural gas production. Due to the dominance of BOTAS in the natural gas market in Turkey, the BOTAS pricing structure effectively sets the domestic market price. In 2018, Turkey imported approximately 98% of the natural gas it consumed, primarily from neighbouring countries.  Accordingly the BOTAS cost tracks world reference pricing and in turn indirectly influences the price available to domestic producers, translated into TL, at some discount. BOTAS regularly posts prices in TL and increases or decreases its Level 2 wholesale tariff from time to time.  The BOTAS Reference Price has averaged the equivalent of approximately US$6.70/Mcf over the last two years.  BOTAS along with a number of other privately owned natural gas distributors in Turkey are expected to be the main potential purchasers of any new domestic natural gas production. The Company expects the BOTAS Reference Price to continue to be indirectly linked to the weighted average cost of imported gas to Turkey and government policy with respect to the level of consumer subsidies, if any.